How to use this webseite 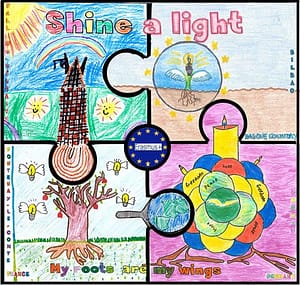 Click image to read about our Erasmus+ School Projects!

We support “Shine A Light” – Through Europe

It was a cold, wet night and the wind was howling through the tall trees which surrounded the school and almost hid it from view. Containers had been placed throughout the tired old school to catch dripping water which came in through holes in the 150 year old roof.

The children were shocked. Under them Mr. Spiderleg rattled at the trapdoor. „ We are trapped“, said Mrs. Spiderleg. The children ran out of the school building. „ Where can we hide?“, asked Sophie. „Let’s run to my house“, answered Peter. That was the best idea. „We will take the short cut through the woods“, Peter said. All three started to run because some steps could be heard. Sophie stumbled over a root and hit her head. Unconsciously, she fell.
When Peter and Tim reached the house they noticed that Sophie wasn’t behind them. With torches they looked for Sophie. Only a small rag of her jacket gave the hint that she had to be in the school house again. Maybe Mr and Mrs Spiderleg took her hostage! The boys decided to call the police. The policemen arrested the Spiderlegs for stealing a treasure years ago. For finding the thieves the school got a lot of money and a new roof.
After 25 years Sophie and Peter were a couple and married. Their children, Holly and Jack, attended the school in the village. One day they came home and told their parents: „Mum, dad. We’ve got a new caretaker. His name is Mr. Spiderleg.“ Sophie and Peter looked at each other with wide eyes: ”Could it be that….?”